I wrote in my sypnosis for Malay Mail Weekend Happenings; “Artist Renny Cheng debuts out of his signature figurative pieces and hits a raw nerve with his contemporary pieces with splashes of bold vibrant colour the creases and folds, peel back as he morphs out of the ordinary.” 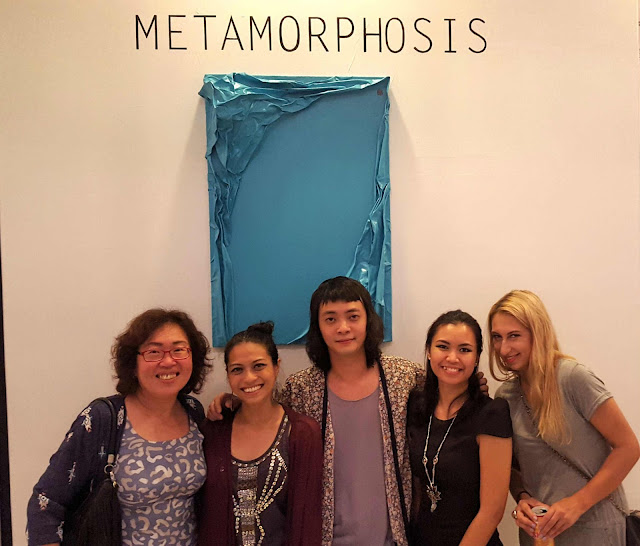 His metamorphosis is deviation and rightly so. This is not for the collector who says, “Hmmm…. Abstract art, either you loathe it or love it. I’m neither.” Says my friend CTW, “I go for impressionist art.” CTW’s was the first to comment on my FB post! 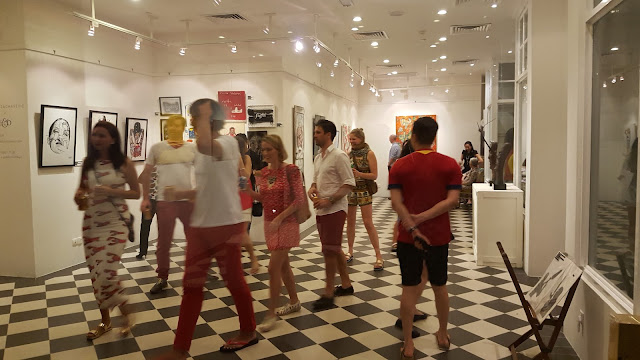 Of course, lots of arty folks heading over from the Ernest Zacharevic x E&O gallery next door. I just love the traffic from one gallery to another!


And rightly so, lots of colours and scenery, I get where you’re coming from CTW. But I like to go where I look at art from several angles, different perspective and believe you, me; I even rotate the pieces in my mind. It speaks to me. Or none at all.

Do I ask Renny outright what he’s trying to do here? 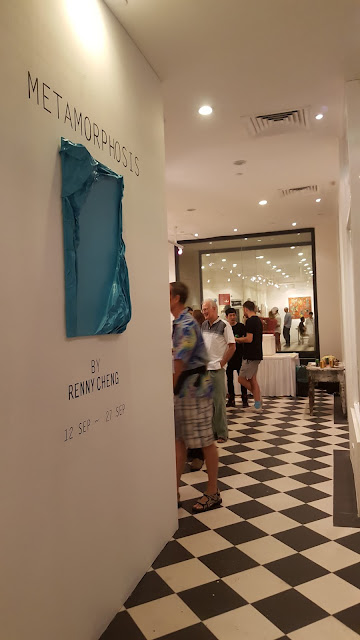 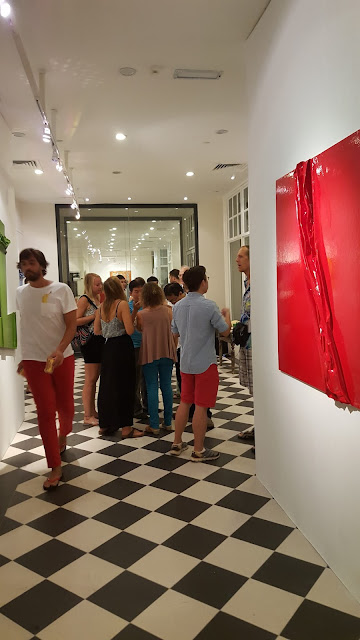 Or do I skulk around eavesdropping to get an inkling?

I just tip back and soak in the atmosphere. And get the giggle bugs with Badass writer Rusana Muhammed.  We writers do that very well.

Lame jokes on a sugar rush. Renny fed us coca cola in lieu of beer.

I’m thinking 16 teaspoons in a can. Rusana and I ingested 8 teaspoons of sugar each. We’re on a roll.

The pieces are stark. 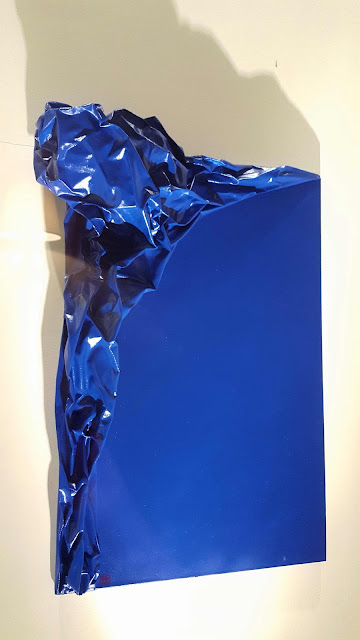 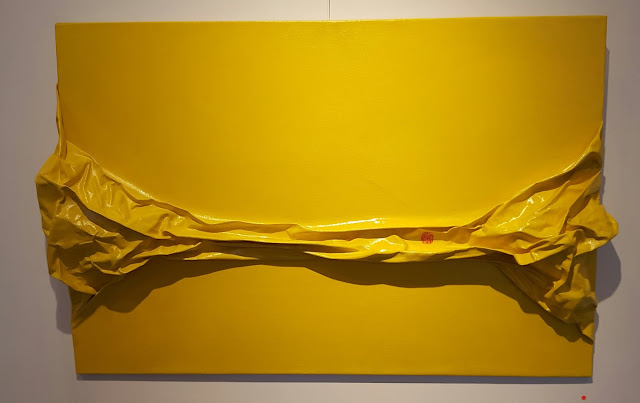 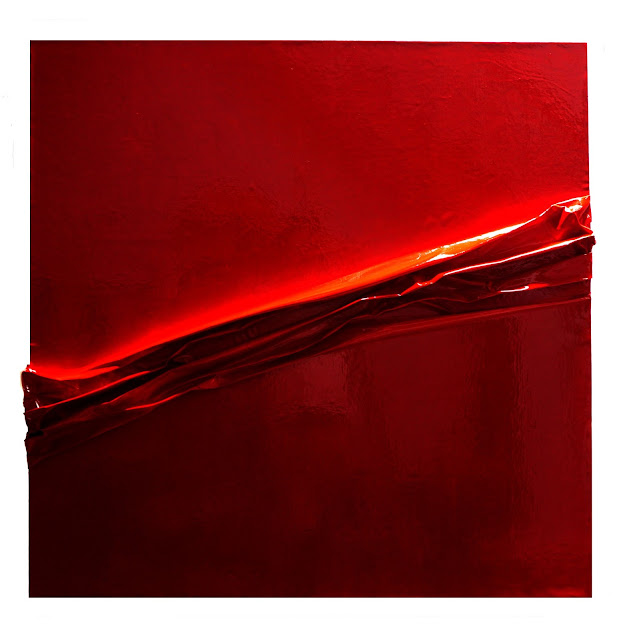 And I also like the red.  What does that mean? 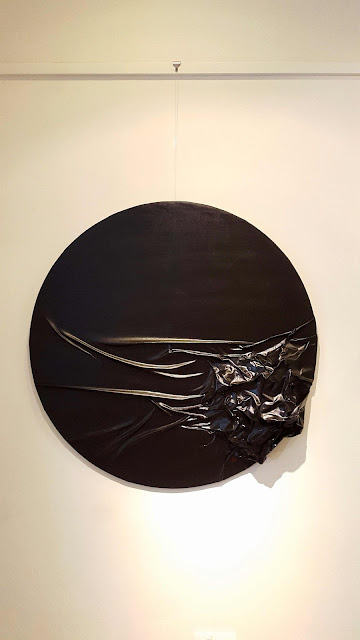 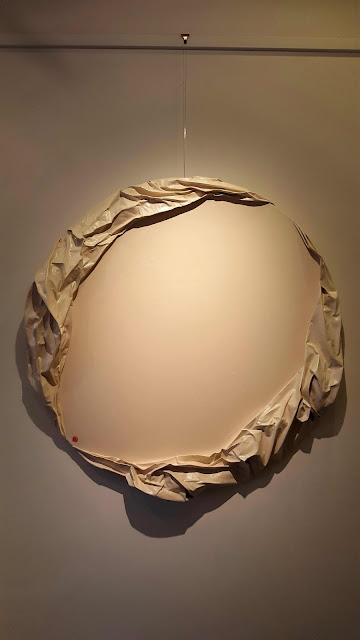 There’s a black and a white and a blue and green even. 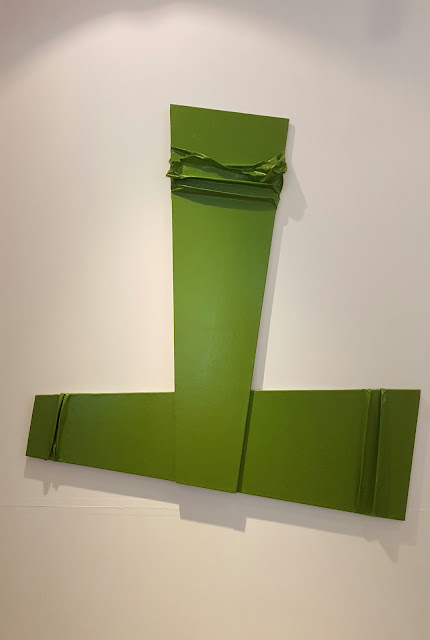 Do these colour united? Divide?

What dominance has one colour over another? Presumably none. 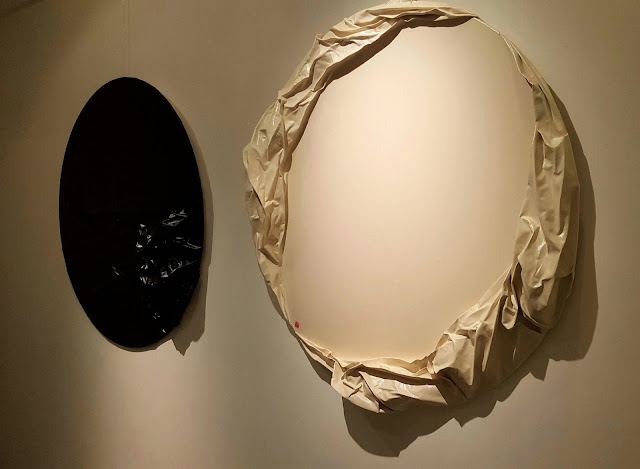 I get it. The black hole and the egg, well, the empty eggshell next to it. 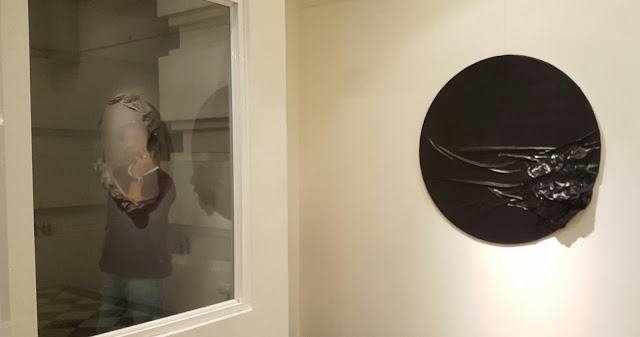 I get spooked easily. 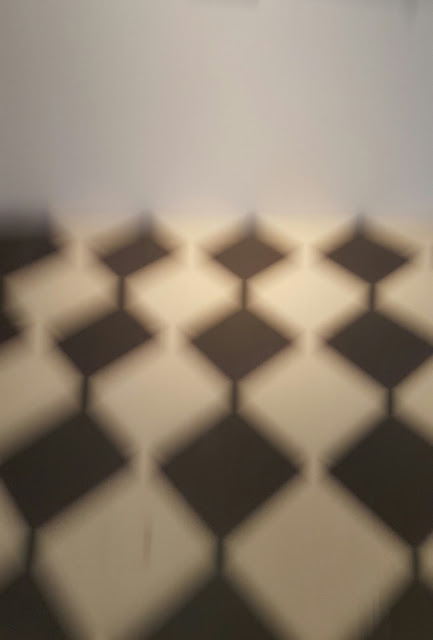 I look at the floor, the sugar kicked in. 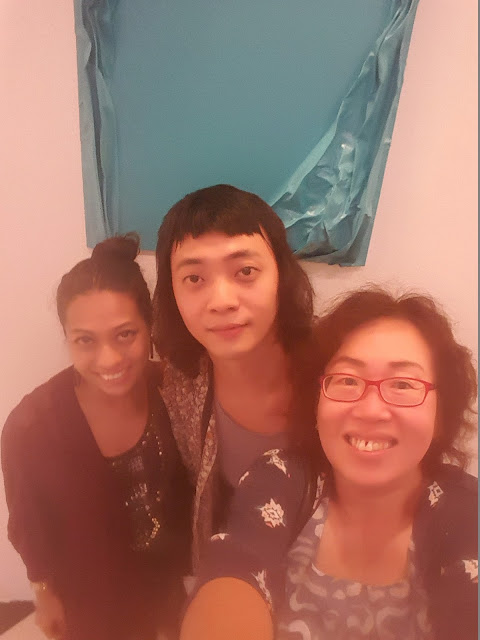 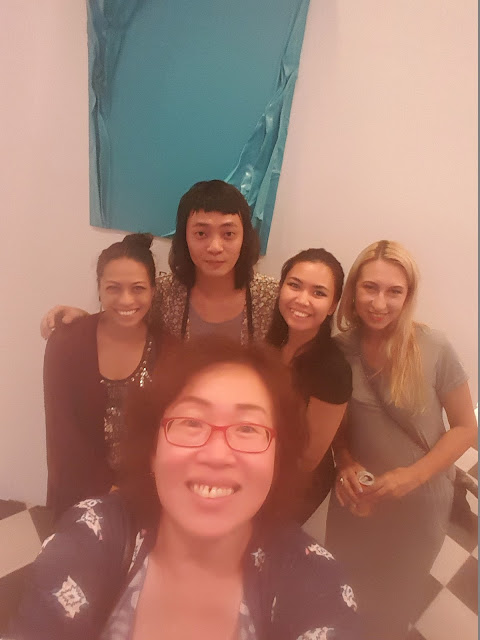 “I don’t know if this is a breakthrough or not, there still a lot of confusion here,” says Renny, he is disappearing within himself.

Or rather into the blue as they say... 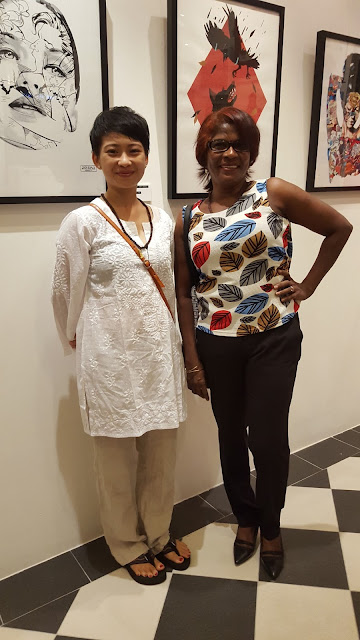 Yogic Stephanie Ang who has perfected the head bobble with Sarojini who doesn't wobble at all.

“If we scratch the surface and break the skin, we all bleed red,” Stephanie says. My eyes widen. In this context, it was a resounding “YES”. 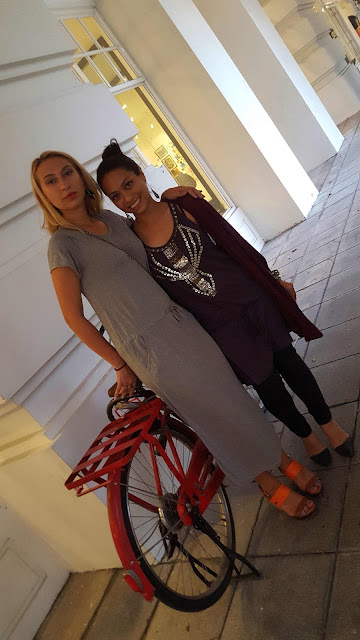 Hin Bus Depot curator Gabija Grusaite is way too cool. She arrives on a red bicycle and we just had to take a picture of this modern day Cinderella! 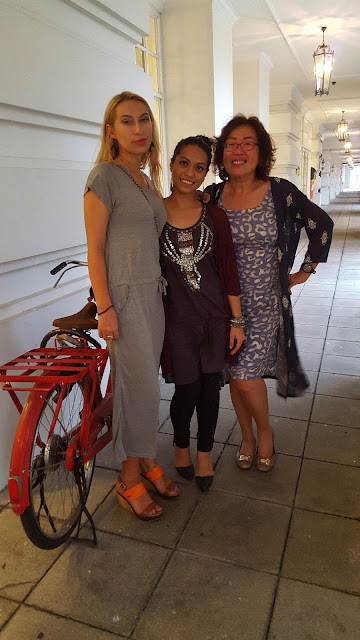 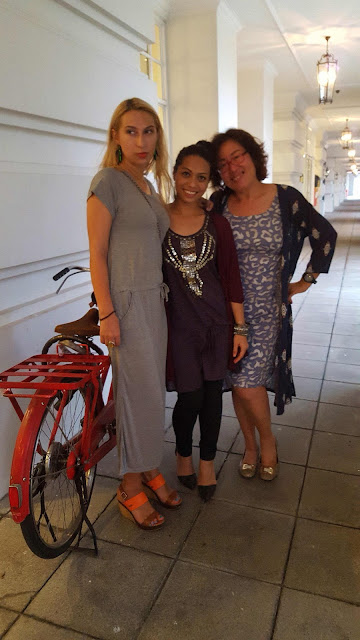 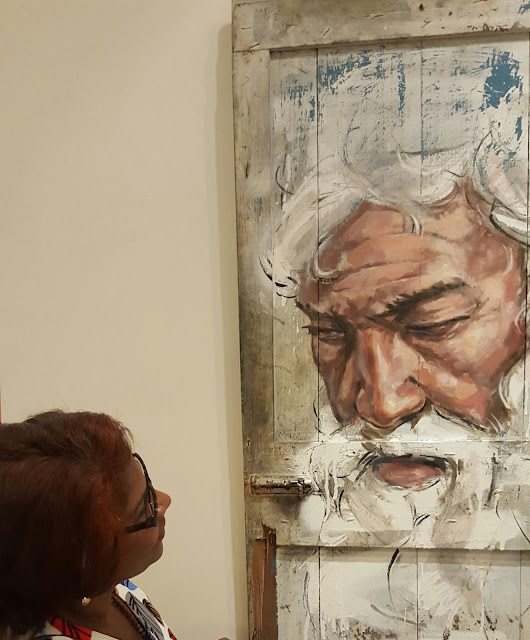 
Doris Lim is a popular freelance writer who blogs as Little Fish on travel and food stories here. Be sure to check out her other inspiring stories and follow her Instagram @SmartDoryID & Facebook to check out more places to eat delicious street foods or dine in the best restaurants!

Popular posts from this blog

I look at Kay, who is equally blurred. Salted Chicken? We look into both fridges, opening and closing doors. There was a large turkey sitting in the chiller staring back. Maybe it’s a Cantonese tradition, Kay volunteers.

Kay’s mother ambles towards us, she has the look of one annoyed with the foolishness of youth – that being Kay and I.

She shoves pass us and takes the turkey out. “As plain as day itself and these two think they can cook it by staring at it!” or some Cantonese idioms to that effect.

Both Kay and I are clueless. He doesn’t speak his mother tongue and I, being part Hakka am equally hopeless.

Kay’s mother takes out the bird and places him on a large enamel plate.

If Pigs Could Fly

September 29, 2015
Last night’s brainstorming with me hung up on food names and tethering off on an architectural tangent was a dot dot dot.

Paul said, “Ya, gud. Gud nice ring. Not bad," and bobbed his head in unison to mine.”

Somehow it was zilch. I was dry as a bone.

Nothing rattles in my head.

The words took a hiatus and left me stranded. Normally it’s a bus depot up there, all the hooting and honking.


This time, iced latte with the full blast of syrup tipped in.

It came. 5 mins to be exact just as my friend Helena had said.

Read more and my new home!

Penang-born former architecture student turned artist Elan Hasyim, 37 created this artwork which was painted over a period of over three months as he is based in Kuala Lumpur.  Total time spent on the mural is about 30 days.

The mural started with the two famous bridges – the Pont Neuf in Paris and the Penang Bridge which Elan connected to portray the relations between the two cities.

“Paris is in a way similar to Penang. The old buildings are conserved and refurbished for adaptive reuse which is great and what I love about the two cities,” he said.

The event was launched by Rahime Bouaziz, director of Alliance Française de Penang. – September 28, 2015.
This mural can be found on the wall of the building of Th…
Post a Comment
Read more